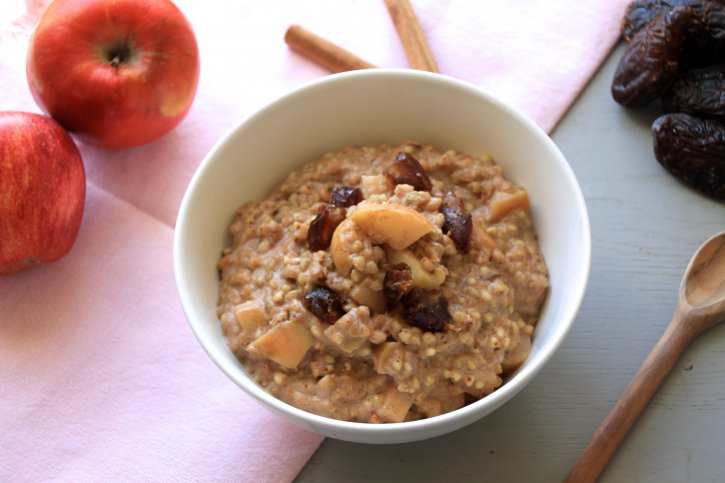 I’m a huge porridge fan, and as the weather gets colder it becomes the most amazing comfort food. This recipe for my Sweet Apple & Cinnamon buckwheat porridge is one of the most delicious porridges I’ve ever made. Not only is this a nutrient-packed breakfast, but it’s become a go-to lazy dinner! Buckwheat is a whole-grain, and despite its confusing name is actually completely gluten & wheat free.  The flavour on its own is pretty bitter so, like quinoa, I would never recommend cooking it on its own. The beauty with this grain comes from the way it absorbs the flavours you cook it in. It soaks them up and begins to burst with that delicious flavouring. Buckwheat is also incredibly good for you. Known for its wonderful anti-cancer properties, it is also a rich source of fibre. Fibre is essential to maintain a healthy digestive system, and also helps to stabilise blood sugar levels so you don’t suffer from that horrible energy crash.

In this porridge, the buckwheat soaks up all the amazing flavours from the almond milk, cinnamon, medjool dates and almond butter. This can only be described as heaven! It tastes a little like a caramel apple, with the texture of rice pudding. The cinnamon will give your metabolism a boost and the almond milk/butter will both make it unbelievably creamy and boost your protein intake. It’s honestly the most amazing way to start the day. 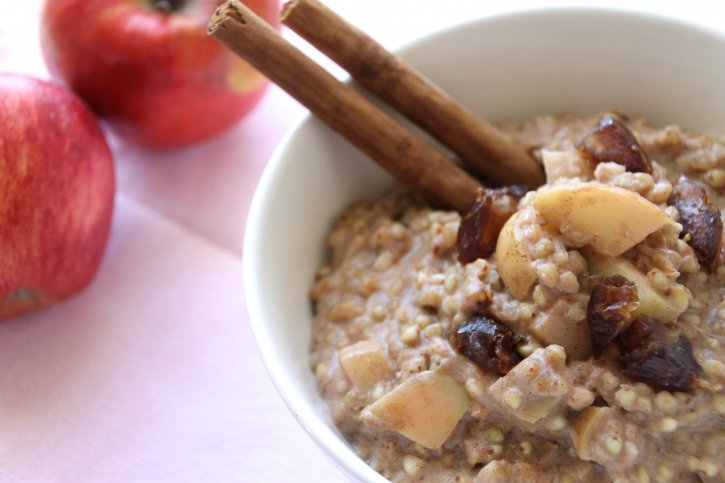 Add one cup of buckwheat to one cup of boiling water, bring to a heavy boil then reduce to a simmer. Simmer for roughly 10 minutes until the water is absorbed. Chop the apple into small cubes, removing the pips! Then add one cup of your almond milk, the chopped medjool dates, apple and cinnamon. Simmer for a further 5 minutes, until adding the last cup of almond milk.

Keep it on the simmer for another five minutes or until cooked. Make sure that at no point does the buckwheat run out of liquid!