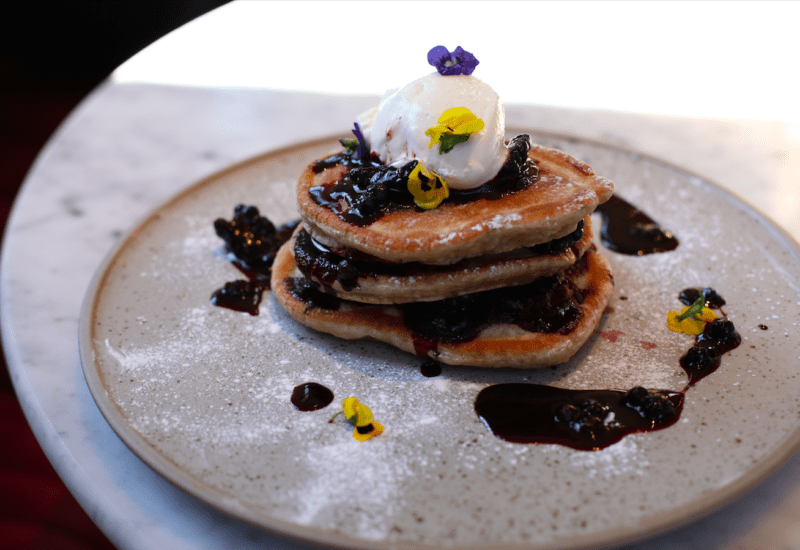 It came to my attention recently that one of the most-made recipes on Naturally Sassy was one of the first I shared on here, my incredibly delicious Vegan & Gluten Free Pancakes. These have been made thousands of times, and quite right, they truly hit the spot. Whilst I know you all love a good home-cooked recipe, the proof is in the pudding (and the number of pictures I get sent), there is something pretty wonderful about having a stack of deliciously sweet pancakes made for you. Plant Based pancakes were not commonly served in restaurants when I developed the aforementioned recipe, but these days there are some fantastic spots you can order a stack from. I set out on a mission ahead of pancake day to find the best vegan pancakes in London, and I’ve struck gold. Here are my top picks! 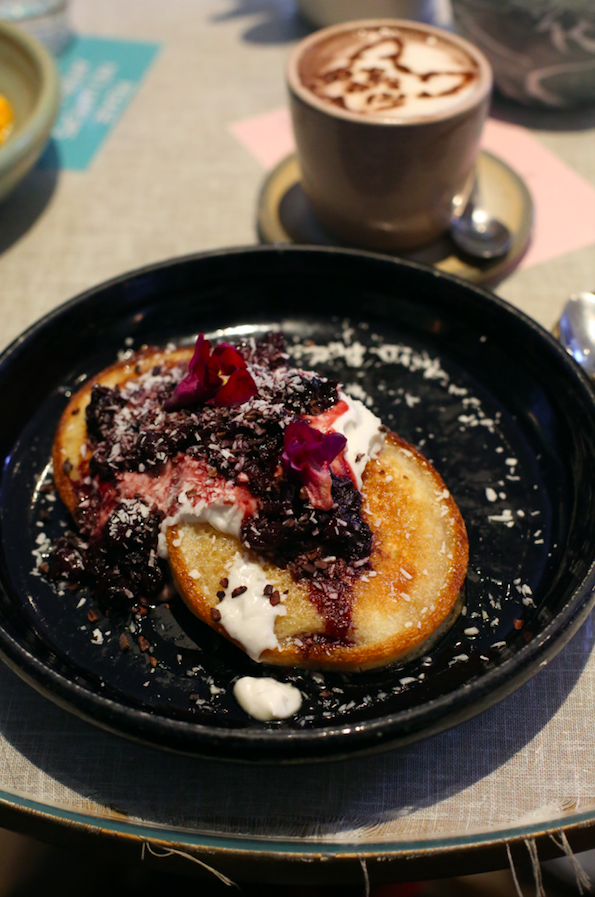 Nestled in a small whimsical courtyard at the start of the Portobello Road sits Farm Girl Cafe, a spot you may know of for their insta-famous Rose latte’s. I certainly posted a snap or two of my pink petalled coffee when the cafe first opened in 2015.  Since then Farm Girl has expanded to Soho and Fitzrovia with new locations in Belgravia and South Kensington on the way. Farm Girl has created the ultimate Aussie inspired brunch-spot; healthy-fresh food, great friendly service and beautifully thought out interiors.

Two large american-style pancakes with a golden shimmer, an indication that the edges will be crisp. To top the coconut yoghurt and sour cherry compote with chunks of berry poking through, a perfect pairing on the eye. Scattered desiccated coconut and cacao nibs, with the gloss of maple syrup makes the dish look laid back and homely – homely in the sense that it’s not taking itself too seriously, the toppings are abundant and there to be spread and enjoyed with every mouthful. A few edible purple flowers finish off the dish, and give it that unique Farm Girl flair.

The pancake mixture used here is pure magic, and in my opinion the best overall base-pancake of all the spots I’ve tried. What this pancake has that most vegan pancakes don’t is that little bit of crisp. The pancakes are light and fluffy, they are sweet but not too sweet, and they are crispy around the edges. The diversity of texture makes it a really well rounded pancake.

Sour cherries are not something I would normally consider to top my pancakes, but after eating this stack I admit that they work wonderfully well. Sour cherries are tart and sour yet also bright and fruity. This cherry compote doesn’t overpower the palate with more sweetness, and mixes wonderfully with the coconut yoghurt. The toppings in general do well at balancing the sweet and the sour, bright and bitter.

A well-rounded pancake experience. A balance of incredible toppings and a crisp and fluffy pancake – served up in a trendy and relaxed atmosphere.

Where The Pancakes Are 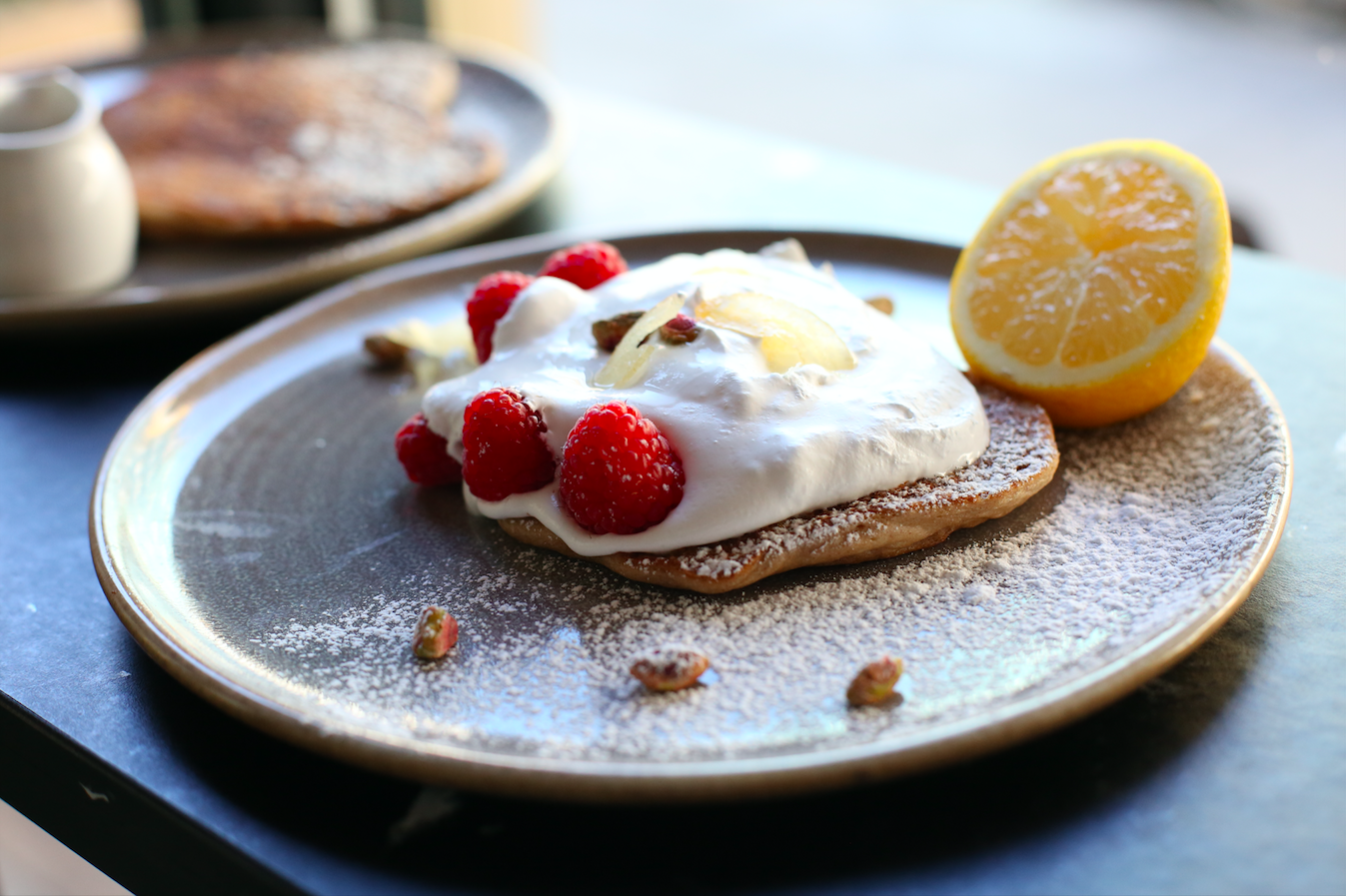 I was introduced to Where The Pancakes Are through my research for this feature. A Shrove Tuesday pop-up on the Regents Canal that transformed into a fully-fledged restaurant with multiple London locations. From both my initial browse on their website, and first appearance when I arrived, WTPA felt like an artisanal IHOP. A place that celebrates the diversity of a universally loved dish – 365 days of the year. I visited the location at Charlotte Street in Fitzrovia, the restaurant is big, spacious, and multi-levelled… showing that while a pancake-only menu may be niche, it’s certainly widely loved.

The menu is vast, and there are many sweet and savoury options to choose from. Whilst there are only a few vegan pancake menus listed, many of the dishes have a bracketed “(voa) vegan option available” next to them. This option uses their 3-in-1 batter which is vegan, dairy-free & wheat free. The batter uses a combination of organic rice and buckwheat flour, soy milk and chickpea water.

On today’s visit after a little menu overwhelm and internal pressure to pick the best pancake, I settled on the vegan option of the Shrove Tuesday Special: “When Life Gives You Lemons” made up of one pancake, raspberries, lemon pistachios, candied lemon peel and house cream. Let’s tuck in….

The dish specified one pancake, so my order didn’t quite allow for the classic pancake stack thats synonymous with this brunch order. The single pancake peaked out underneath the cream, a little more like a pancake plate, but that’s no bad thing. On top of the cream we had candied lemon peel, droplets of lemon pistachios and fresh raspberries. Half the plate was dusted with sugar, and half a lemon sat on the side to squeeze a little lemon juice into the simple cream.

A perfect pancake, the kind of pancake that only needs a little bit of vegan butter and maple syrup. So light and fluffy, it feels impossible they didn’t use eggs – but of course, they didn’t which makes this consistency a delightful surprise. Of all the vegan pancakes I’ve tried the inside of this pancake is by far my favourite.

For one pancake the volume of cream did feel fairly excessive here, and I did wish perhaps that the cream was infused with lemon instead of adding the lemon juice on top. The candied lemon and pistachios added something special, and paired well with the raspberries.

The pancake itself. To die for. 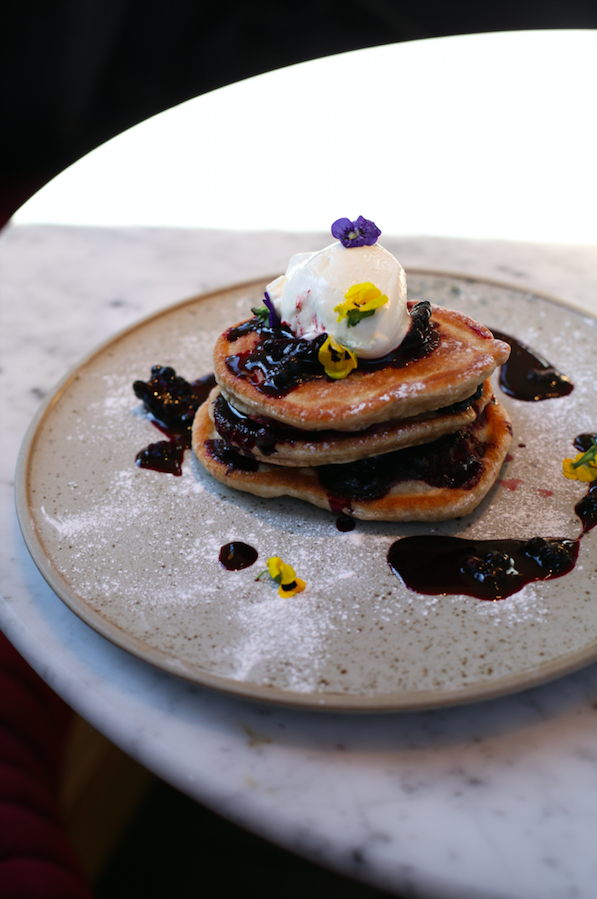 Mallow is the newest plant based restaurant by the team that have brought us Mildreds (my go-to foodie spot on a Friday night, and every night quite honestly.) Based on my devotion to Mildreds, making a trip to Mallow has been high on my list for quite some time. Mallow is located in Borough Market, the foodie spot to know about if you’re in London. The market celebrates an abundance of artisanal prepared foods and fresh, local, organic produce. It’s a fitting place to home a sustainable, ethical restaurant and what will certainly become a plant based institution. You can’t miss Mallow, a big red brick building with a flower mural and gloriously big windows painted in an electrifying blue-green. The restaurant spans two floors, with two different bar areas. The interiors are sophisticated, but grounded with the continuation of plant inspired illustrations creeping beautifully up the walls.

Today’s trip was to try their vegan pancakes, but based on the faces of those sitting around me, and the ‘petal’ bar that looks like some fantastic cocktails get created behind, I’m looking forward to trying lot’s more from Mallow.

There’s only one sweet ‘plate’ listed on the brunch menu: pancakes, forest berries, white chocolate mousse. After I drank my Oat Latte, which I must say as a coffee snob I was completely delighted by (perfect balance of milk to the acidity of the coffee bean) my pancakes arrived.

A generous stack of 3 pancakes with an artistic flair given to the placement of the three toppings. The forest berry compote drizzles down the pancakes and then down the plate. An intentional placement made to look beautifully accidental. The edible flowers follow the flow of the compote, and the white chocolate mousse sits proudly on top.

The pancakes were sweetly flavoured with hints of vanilla and a distinct custardy flavour that only soy milk adds. A delicious spice comes through from the cinnamon that makes the pancakes themselves layered in flavour. This was their selling point, there was a real depth to the flavour of the pancake, and even without the toppings there was something to explore with every bite. The texture wasn’t quite as dimensional, with a little bit too much chew for my personal pancake preferences. They were dense and filling, which did mean I had one pancake leftover to take home for later.

3 textures – the soft whip of the white chocolate mousse, the silky sweet sauce from the forest berries and the bite from the bits of whole berry left in the compote. These toppings stole the show. The white chocolate mousse, as all good mousse’s are felt light and air-like on the tongue, a velvet like contrast to the other elements on the plate. A simple trio, but an undeniably brilliant one.

The toppings and presentation on the plate and in the environment around you. Eating at Mallow is an experience that lifts beyond the plate. 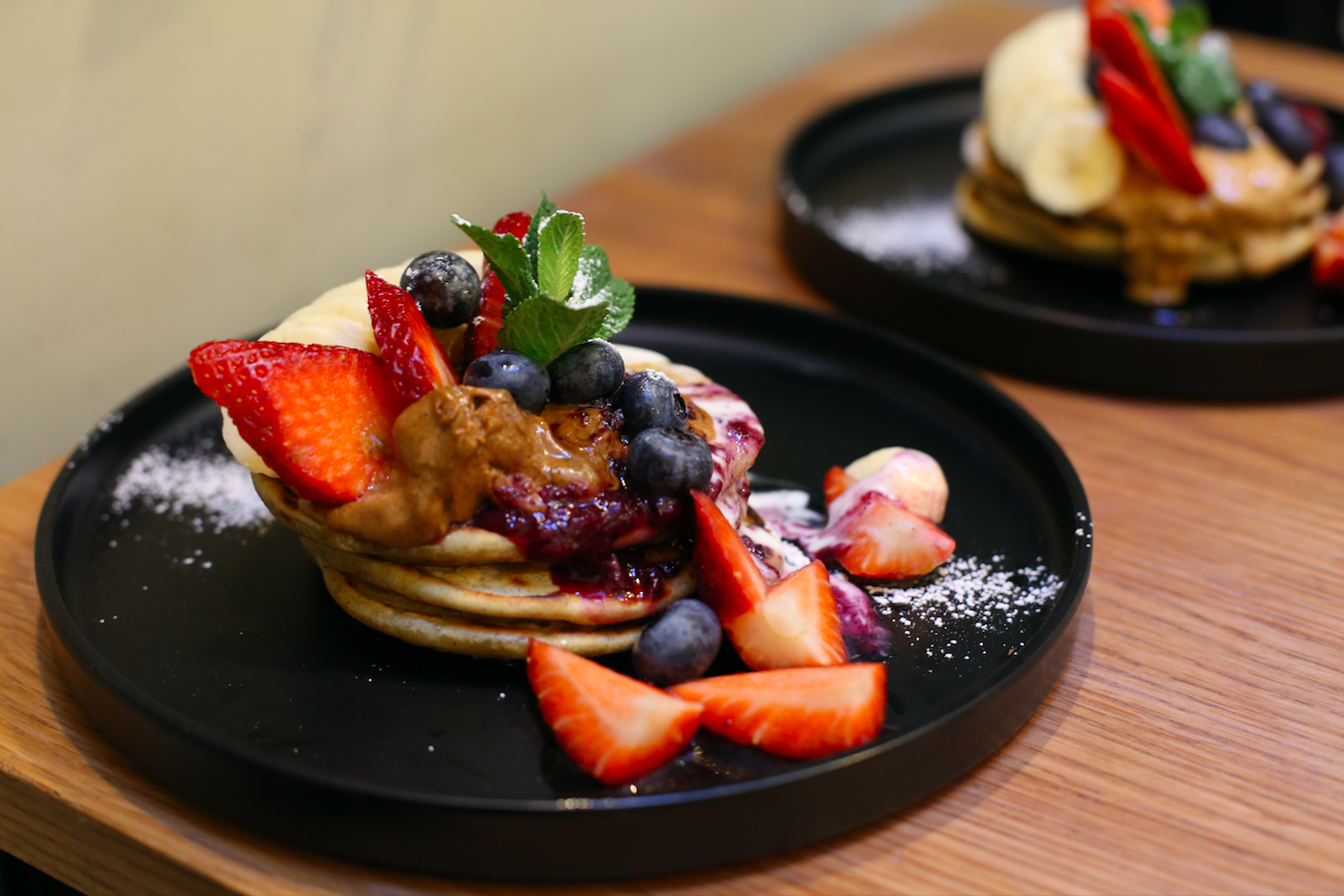 KIN is a charming vegetarian eatery on a sleepy street in the heart of Fitzrovia. The cafe-front is laid back and inviting, the kind of place you could so easily stumble upon without realising it serves vegetarian food. A place that lures you in and shows you what plant based food has to offer. KIN has a mixture of tables and raised bar seating: a clever use of space to open their doors to as many customers as possible. The outside seating felt communal, a place I can imagine enjoying for a coffee in the sun.

The first thing that stands out is the deli-style display of freshly made salads, grain dishes and baked goods you see on your first step into the café. KIN pride themselves on creating dishes that make the most of seasonal ingredients, and this laid back display seems like an ode to an ever-changing menus based on what seasonal ingredients have been sourced.  The friendly staff at KIN stand behind this display, and next to the coffee machine. I promptly ordered my Oat Latte.

There was one pancake option on the menu, so naturally my order was pre-decided. Before my breakfast arrived I did eye up a neighbours vegan waffles, which led me to think that perhaps a ‘best vegan waffles in London’ feature was needed. It looked divine. But, back to the pancakes.

Sitting on two black plates, the colours from the pancake toppings felt bright and luminescent. Three pancakes stacked high with a mixture of banana, fresh blueberries and strawberries placed around the plate and on top of the pancakes. Three sauces converged into one: almond butter, coconut yoghurt and berry compote. A lined dusting of sugar and a garnish of mint to top. Despite the toppings perhaps feeling on first glance fairly standard, it was styled beautifully.

Overall the pancakes had a soft, slightly sweet flavour. The pancakes were a little chewy for my personal taste, and a small effort was made to cut through them. That being said I enjoyed the flavour.

The Vegan pancakes were served with banana, mixed berries, a choice of peanut or almond butter, coconut yoghurt, agave nectar and berry compote. I went for the Almond butter. These toppings are my go-to’s, and are what I reach for with my own home-made pancakes. The toppings felt familiar, so there was natural bias to feeling a little underwhelmed, as it’s a combination I know so well. However on second bite, I decidedly realised I reach for these pairings because they work so well. The toppings give you a great range of different flavours and textures – the sticky almond butter, creamy coconut yoghurt, juicy berry compote… there’s lot’s to get stuck into.

Perfectly paired toppings, that feel homely, cosy and familiar. A relaxed café to unwind and feel at home.

After trying many, many more pancakes than have made the page these are my four favourites – The Best Vegan Pancakes in London. 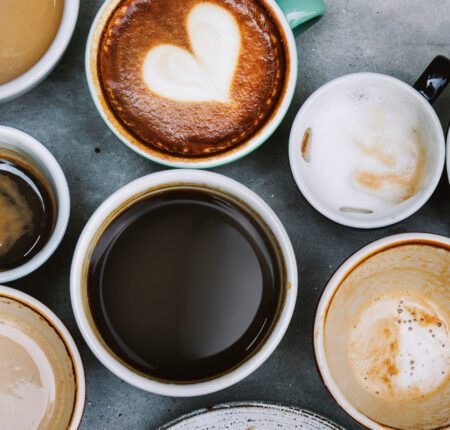 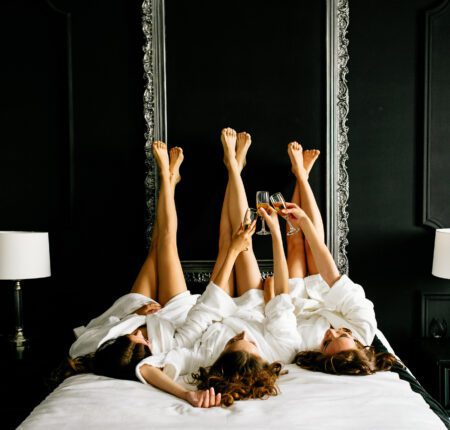 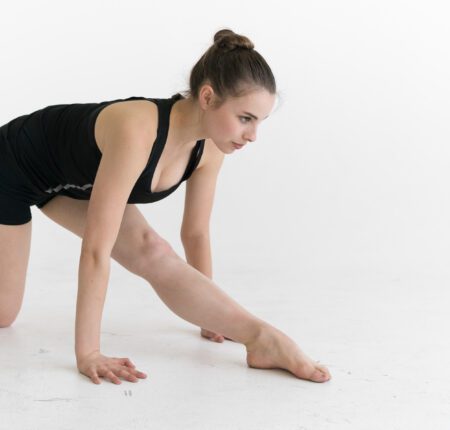