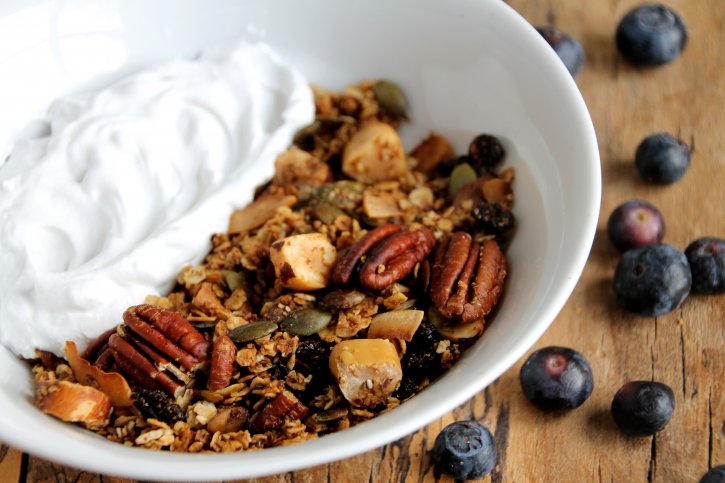 Granola (along with chocolate croissants) was a staple breakfast growing up and has always had a place in my heart. There’s something just incredible about sweet, crunchy, caramelised oats, nuts and seeds sprinkled over a creamy yoghurt. My mouth is already watering! A few years ago, I would eat my store-bought, sugar-laden granola with a strawberry dairy yoghurt, mixed with even more sweetener and sometimes even drizzled with Nutella. I was a complete sugar monster!  When I first made the transition to eating healthily, granola was one of the first attempts I made at baking something healthy and it was such a success. Since then I’ve been developing my favourite granola recipe, too what I think is complete breakfast perfection! It’s nutty, fruit, sweet and crunchy, with hints of coconut, caramel from the maple syrup, a touch of vanilla and cinnamon. I then pair it with my homemade coconut yoghurt, which is just match made in heaven!

It’s packed with protein from the brazil nuts, pecans, pumpkin seeds and flaxseeds. Nuts are in particular great for those eating a primarily plant-based diet as they truly do give you an incredible amount of protein; For example, one cup of pecans gives you around 10 grams, they also provide a wealth of antioxidants, vitamins and minerals. Chia seeds are one of the best plant-based sources of Omega-3’s. so as well as adding an awesome crunch to this granola, they also support glowing skin, nails and hair. The oats are a great source of Low GI carbohydrates, which will keep you energised all morning. Normal oats are around 99% gluten-free, but for those very allergic it is possible to buy gluten-free oats. For the syrup, which binds this granola together we use coconut oil, maple syrup, vanilla extract and cinnamon. Coconut oil is a tad expensive, but don’t be put off, one tub will last you absolutely forever. It’s a great investment! When you combine it with 100% pure maple syrup, vanilla and a touch of metabolic boosting cinnamon this incredible unique flavour forms which make this granola unbelievably moorish.

Not only is this recipe delicious, but a million times healthier than any store-bought granola. 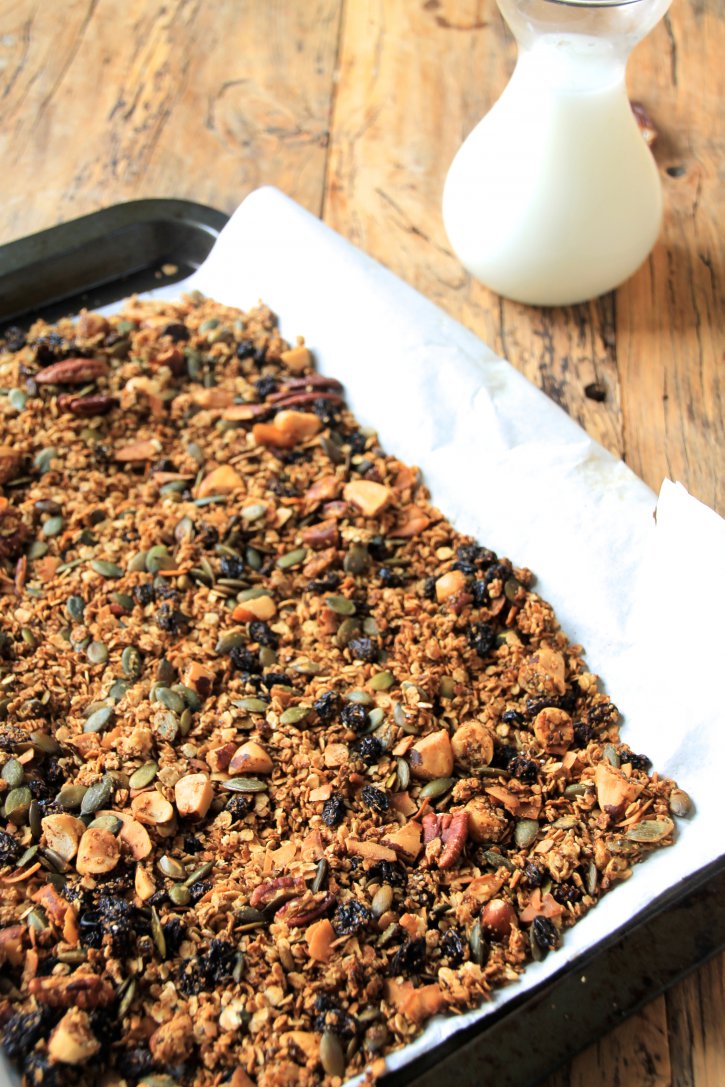 Preheat your oven to 180 degrees. Start by chopping your brazil nuts and pecans into smaller chunks. To save time you can quickly pulse them in a food processor.

Mix in a bowl with all the other seeds, coconut flakes, sultanas and the oats.

Then in a saucepan, combine the coconut oil, maple syrup, vanilla extract and cinnamon. Heat until the coconut oil is melted. Pour into the dry ingredients and mix until everything is well coated.

Place the mixture on a lined baking tray and place in the oven to cook for around half an hour.